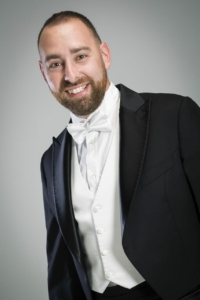 Riccardo Bianchi hails from Varese, Italy. He is the Artistic Director and Chorus Master of KorMalta – Malta’s National Choir. He is also the Musical Director of the Orchestra Sacro Monte di Varese, Italy.
He was awarded with two Special Commendations at the London 2015 Conducting competition as the best Beethoven`s performer of the competition. He was awarded with Diploma di Merito in Choir conducting and poliphony both in 2015 and 2016 from the Accademia Musicale Chigiana di Siena with Roberto Gabbiani.

He also graduated with Honours in Philosophy from the “Universitá Cattolica del Sacro Cuore” in Milan.

Riccardo made his debut in 2012 as a conductor in St Petersburg (Russia) with the State Hermitage Orchestra. He has conducted a number of established orchestras since including the London Classical Soloists, the Malta Philharmonic Orchestra and Malta Youth Orchestra, the FVG Orchestra, the Mihail Jora State Symphony Orchestra, the “Virtuosi Brnensi”, the “Hans Swarowsky” Symphony Orchestra, the “Nuova Cameristica di Milano” Symphonic Orchestra and OSM Varese Symphonic Orchestra. He has collaborated with internationally renowned soloists such as Fabrizio Meloni, Diego Dini Ciacci, Roberto Plano, Francesca Lombardi Mazzulli, Marta Mari, Patrizia Patelmo and with Stage Directors such as Fabio Cherstich and Gianluigi Toccafondo.

He has collaborated with the Royal Concertegebow Orchestra and with Maestro Daniele Gatti as Conductor in Residence of the Malta Youth Orchestra on the occasion of the RCO Meets Europe 2018 project. For his operatic debut he conducted “Suor Angelica” by Giacomo Puccini, during the “Varese Estense Festival” in 2018. This was followed by Mozart’s Don Giovanni in 2019 at Teatro di Varese and Teatro Sociale di Stradella, Pavia.

As Artistic Director and Chorus Master of KorMalta Malta National Choir, Riccardo has undertaken intense work to make the Maltese national choir a versatile and qualified group to face a very diverse repertoire. He has also curated the realisation of «The Planets» by G. Holst and «Chichester Psalms by L. Bernstein directed respectively by Michalis Economou and Wayne Marshall. He has collaborated with many relevant choral ensembles in Italy and Europe including in 2017, the Estonian Philharmonic Chamber Choir, on the occasion of the performance of Beethoven’s Ninth Symphony in Valletta.

Riccardo has been entrusted by a number of contemporary composers with conducting the world premier of their works: Andrea Gottardello’s «Una notte a Punta di Mezzo» a Symphonic Poem for the 200th anniversary of Varese Città, with the participation of the internationally renowned pianist Roberto Plano in 2016, five pieces of contemporary Maltese music during a folk fusion orchestra concert with Malta Philharmonic Orchestra, the Concerto for Oboe and Clarinet by Euchar Gravina with Fabrizio Meloni and Diego Dini Ciacci as soloists in 2018, and has been appointed to conduct the world premiere of «Natività»: Opera in two acts by Pippo Molino.